Excited? We all are. The film is titled “Ouija” and Universal Pictures has bought the rights of the film to release it worldwide. A date of October 2014 is set and the theatrical trailer is launched, with it being uploaded soon on the Internet too.

The film tells the story of a group of friends who find an ancient Ouija board (a device to conjure spirits). The thrill craving group invokes a spirit on the board, which brings havoc in their lives. They have to fight against all odds with this ancient evil that seems invincible.

The film is written and directed by Stiles White (writer of Knowing, Boogeyman & The possession) while the screenplay is written by Simon Kinberg (X Men, Mr. and Mrs. Smith & Sherlock Homes) along with Juliet Snowden.

The past portfolios of producers, writers and actors of this film surely bring curiosity about the project. Lets hope it scares us as much as we are anticipating it to! 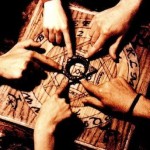