After making the critically and commercially successful reboot of 1981 classic horror Evil Dead, producer-director Sam Raimi is doing one more reboot. This one is going to bring out the classic TV ghost story Poltergeist back on the big screen. Sam is working as a producer this time with Gil Kenan (Monster house, City of Ember) serving as the director.

The writer-producer of the reboot have reimagined and contemporized the classic tale about a family whose suburban home is invaded by angry spirits. When the terrifying apparitions escalate their attacks and take the youngest daughter, the family must come together to rescue her. The original film from the 80’s was a box office blockbuster and went on to have several sequels later. 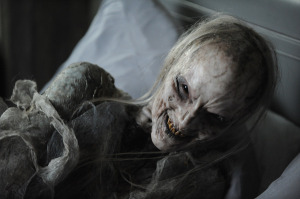 The ghost of your TV screen is coming back