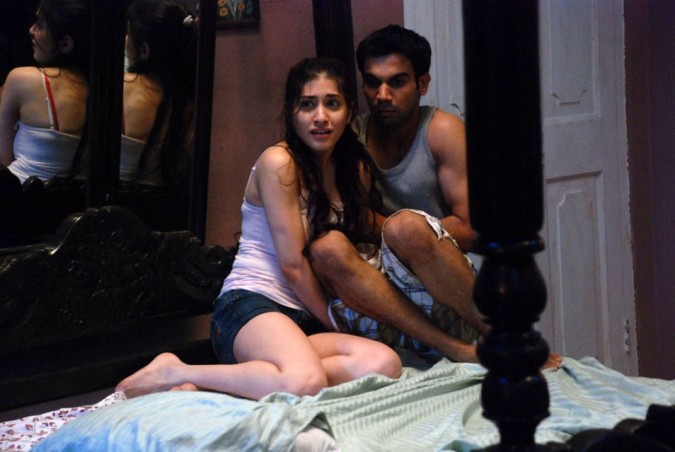 I consider the first part of Ragini MMS one of the best horror films made in India. Although the second part of the film was more successful at the box office the reason behind it was the presence of Sunny Leone in the sequel. The first part was notable for many reasons. The film was shot in a secluded bungalow with a shabby exterior and old furniture inside which created a perfect backdrop for a haunted house. The format of the film was found footage and the camera work was extraordinary because in most of the scenes there was so much extra space in the frame to keep the audiences guessing throughout the film. Cameraman Tribhuvan Babu deserves credit for this. Up to 3/4th of the film no ghost was shown on the screen, only some spooky paranormal and inexplicable events kept us at edge of our seats. The only downer of the film was the appearance of the witch, who has a funny Marathi accent and was created by using mediocre level computer graphics. It was the first film by the writer-director Pawan Kriplani and he shows a great potential in the genre of horror. After this his second film was Darr@themall featuring Jimmy Shergil which has a below average story with most of the content lifted from Hollywood films. It got a lukewarm response at the box office.

Now after a gap of almost two years, Pawan Kriplani finally started shooting for his next film. The film titled Phobia is a horror thriller. Indian actress Radhika Apte is playing the main lead role in the film. Radhika has done some very good characters in Hindi films, but the most suitable to mention when it comes to thriller is her latest character of a young sensual wife in Sujoy Ghosh’s short thriller Ahalya. As an actor she possesses the ability to be mysterious as well as being able to transform into a normal girl’s skin in seconds which can be very useful in a horror thriller.

Eros international is coproducing the film with next gen films. Viki Ranjani of next gen films has earlier produced acclaimed thriller Table no. 21. So the whole team of this upcoming Indian horror thriller looks promising and we can expect something out of the box this time. Although with the same title two films are made in English in 1980 and 2013 and in Thai in 2009, we hope that the content of the Indian title is going to be original and not lifted by any of these other international horror films.