Hollywood horror website Bloody Disgusting has vociferously appreciated the upcoming horror Varsity Blood. The title of the film itself is very catchy for the young audience because of it having the word ‘Varsity’.

The film tells the story of cheerleaders and gregarious boys from a university, most of them having had a dark secret in their past. After a Halloween football match they decide to go to an isolated farmhouse to party completely unaware that someone else was already waiting with an axe and a bow-arrow with a voracious desire to slay them.

The trailer of the film is quite promising with hot chicks and guys enjoying themselves. And then comes an uninvited guest, masked. Seems interesting.

Jake Helgren (Bloody homecoming) has directed the film who had started his career with a short video “Severed Lives”, which also had a very different plot and had received critical acclaim for it. Lexi Giovagnoli (1 chance to dance) plays the lead actress.

The film is set to release on VOD in August’2014 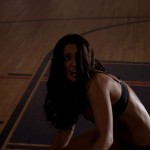 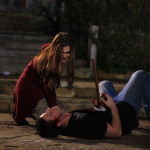