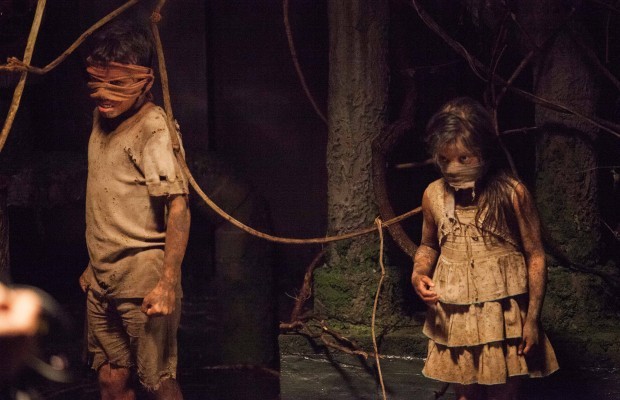 Creepy trailer of English horror film OUT OF THE DARK

This film, a Spanish-Columbian collaboration directed by Spanish director Lluís Quílez takes ahead the journey of haunted house movies with some scary get ups and an interesting premise.

The film tells the story of a couple that travels to Columbia for a manufacturing business with their only daughter and take a beautiful house out of the city surrounded by a forest. Strange things begin to occur soon and they realize that the house is haunted by more than one spirit.

The trailer is catchy mainly for two things, first the innocent girl who is wandering around the house and chasing mysterious voices into the dense forests and secondly the look of the ghosts with mummy type clothing wrapped around their faces.

The film stars Julia Stiles (10 things I hate about you, The Omen) and Underworld star Scott Speedman. The screenplay is written by Javier Gullón and David Pastor (The Carriers).

The film is already released in Germany and looking forward for a United States release by Vertical Entertainment.