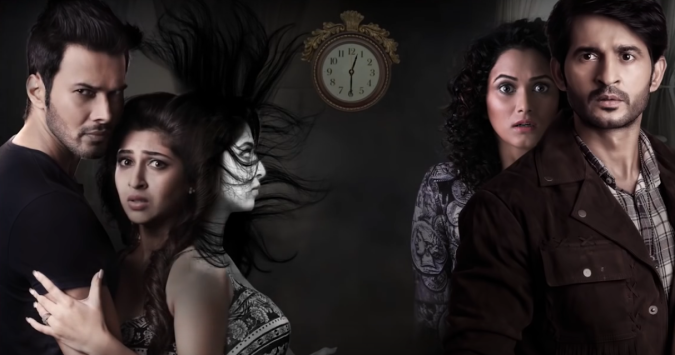 So in Saansein, our damsel in distress, Shirin, sings soulful romantic numbers at a happening club but every day, as the clock strikes 12.30 am, she disappears. After a guy dies under mysterious circumstances while trying to get too close to her, a police investigation begins and Shirin is the prime suspect. Soon after, our hero, Abhay, comes to Mauritius and falls in love with Shirin. But this love story is not going to be a simple one. One night, at the behest of Shirin’s friend and boss Tania (Neetha Shetty), Abhay witnesses the torture Shirin has to endure at the hands of a ghost (yes, the horny one). Turns out, the ghost is that of a jilted lover from Shirin’s ‘pichhla janam’. Well, this is it?

Saansein offers occasional thrills and catches you unaware at times, but for the large part, it’s only patience that can get you through. From people inexplicably dying, to a highly possessive ghost raping a mortal (just like Tabu in forgettable film Hawa), Saansein veers from comical to illogical. Rajniesh and Sonarika add glamour, Hiten, who plays an exorcist, looks out of place and Neetha’s only job is to feel bad for Sonarika’s character.

Director Rajiv S Ruia tries hard to deviate from the regimented stuff but the lure of the flesh ultimately becomes too strong. While the scare sequences follow the hackneyed route, there’s palpable sensuality in the representation of the female form even though the exposure of flesh is fairly limited. Even with the short and snappy run time, this isn’t got a hope in hell at the Box office!