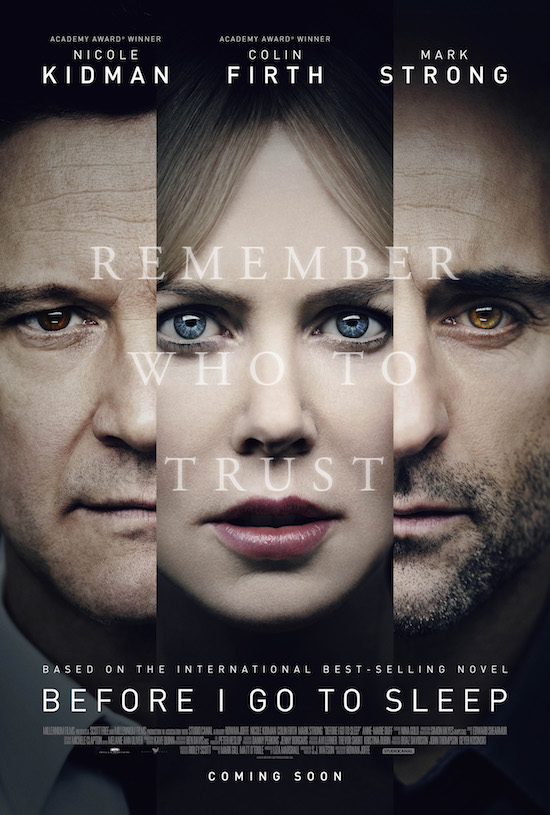 ‘Before I Go To Sleep’, the very first novel written by S.J. Watson which went on to become the best seller in The Sunday Times as well as The New York times is going to have a film based upon it with the same title. This novel made Watson a star overnight and was subsequently translated into more than 30 languages.

This film is a big budget affair with Nicole Kidman playing the role of an amnesiac woman with Colin Firth as her husband. Mark strong is also playing a pivotal role in the film. The film is about a woman who faces a trauma in her previous life and now wakes up every morning with no memory of her past due to this. One morning when she wakes up, she discovers some new truths that start a chain of events in her life where she doesn’t believe anyone around her, not even her husband nor her doctor.

We surely get a tone of Memento in the storyline, the Christopher Nolan directed thriller with the protagonist losing his memory every now and then. He begins writing all the necessary information on his body and uses a Polaroid camera to capture images for him to remember. We need to wait till the release of Nicole Kidman’s new adventure to find out how much it actually matches the premise of Memento. As far as the trailer is concerned, it’s different and fairly impressive – and of course, the actors’ performances needn’t require a mention.

Director of 28 days later and The American, Rowan Jaffe is directing the film as well as writing the screenplay. The film is currently its postproduction stage and set to hit the screens worldwide on 12th September 2014.