James wan’s super hit blockbuster THE CONJURING was a masterpiece. The film was based on the real life haunting that happened in the Perron family house, which were investigated by paranormal experts Ed and Lorrain Warren. Out of the several spooky characters of the film, one was a real horror, the possessed doll Annabelle, which was later kept in the small museum of the Warren house.

The doll is going to be the main subject of the upcoming spin off of THE CONJURING, titled ANNABELLE. Ace cinematographer John R. Leonetti (Insidious, The Conjuring) is directing the film on the screenplay written by Gary Dauberman (Swamp and Blood Monkey). The actress who is to play the main lead is also called Annabelle (Body of lies, X men first class) and PRIMAL FEAR actress Alfre Woodard will also play a pivotal role in the film.

The story of the real doll itself is a great horror as before coming to the Warren’s museum, the doll belonged to a girl Donna, who got it from her mother in 1970 when she was a child. Years later after Donna shifted in a flat with her friends, strange things began to occur there such as the doll being found on the bed with red hands and Donna’s partner having nightmares wherein the doll was trying to kill him by choking his neck. On further investigation it was discovered that the doll previously belonged to a girl Annabelle who suffered an unnatural death and her soul was captured in the doll.

Horror website Bloody Disgusting reported about the release of a teaser of the film which is in the production phase and a release of October 2014 is planned. 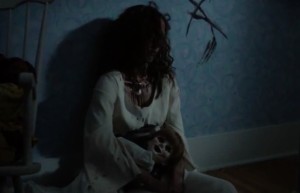 Trailer of ANNABELLE garners 5 million plus views on YouTube