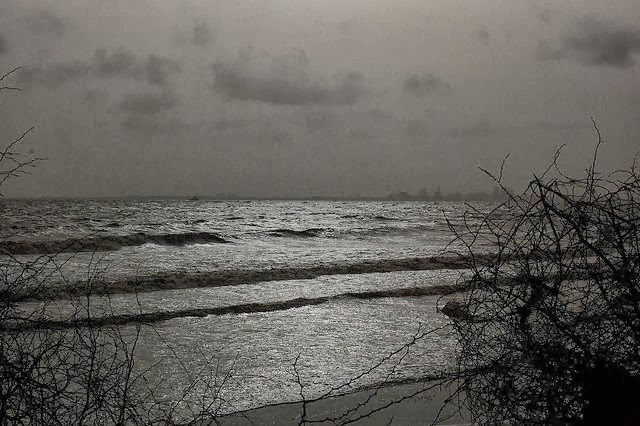 When one ponders about going to the beach, the first few thoughts that usually come to mind are those of a pleasurable summer afternoon on a sandy shore where one can relax, enjoy lingering walks and watch the sun set. However this is not so much the case of the Dumas Beach on the coast of Gujarat, India.

Situated along the Arabian Sea just a short distance from the city of Surat, this beach is not your average weekend getaway, but a dark, eerie spot notorious for its distinct black sand and grey cloudy skies – and more importantly, the wandering souls of the dead. According to Hindu custom, after death, bodies are cremated and the remaining ashes are scattered into some form of water body – the Dumas Beach is just one of these spots where such last rites are performed.

The Hindu faith lies in the belief that after one’s demise their soul is released from the body form and reaches Nirvana, or Moksha. However individuals who have suffered a sudden or tormented death are not able to release their souls to this state and are therefore left beleaguered and suffering between the two realms. Quite disturbingly individuals who have died such a death are the ones that are chosen to be cremated at this very location.

There have been many reports of strange noises akin to a whisper travelling with the winds as people walk along the beach, often deemed as the very spirits of the unfortunate victims who have sadly been cremated here. Even more disturbing is that fact that packs of stray dogs often roaming the beach spend hours on end howling till the crack of dawn. Some individuals have even come and said that as they walked along the beach dogs have come and stopped them from walking on any further, as if they know it’s not safe to go ahead.

Of course, it’s palpable that most would avoid this place, especially at night. However there is a much more worrying reason as to why they wish to stay away – there have been actual documented reports where people who have walked along here have just disappeared into thin air, never to be found again.