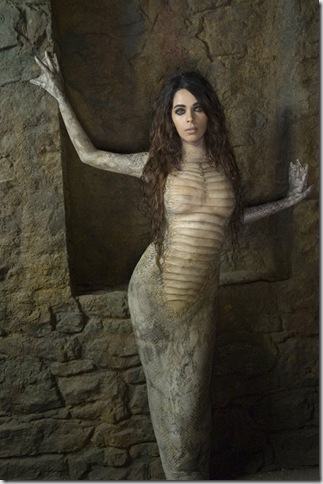 Hollywood director Jennifer chambers lynch claimed before the release of this film that it will be something never experienced by Indian audiences. She was absolutely right because surely Hisss shocked the viewers. It was actually a real horror watching this 90 minutes long film in theaters.

A stupid foreigner, who is searching for a Nagmani, kidnapped the lover of a female serpent. The angry reptile, which is an Ichchadhari Nagin (serpent which can transform into any living form) set a course for revenge and started killing everyone responsible. A cop is given the case to investigate these mysterious killings.

The film has a funny storyline mostly giving us opportunities to laugh instead of feeling terror. The snake woman dances, seduces, fights, bites and even climbs on electric poles. The cop is totally disinterested in the investigation, and I don’t know why his wife was kept in the movie. (both the characters were played by Irrfan Khan and Divya Dutta). The effects of the films are worse than we saw on TV today (done by famous effect designer Robert Kurtzman). The film was made in English and Hindi simultaneously along with dubbing in several Indian regional languages.

It was surprising to see that the film had so many talented actors, technicians and effects designers and yet delivering such disappointing results. Jennifer Lynch was also heavily criticized for her direction in her maiden film Boxing Helena as a director. It seems that she still needs a crash course in direction.

The lead actress Mallika Sherawat went to Cannes film festival for the promotion of this film and posed there with a real 22 foot long Burmese python on the red carpet (I really feel pity for the python).