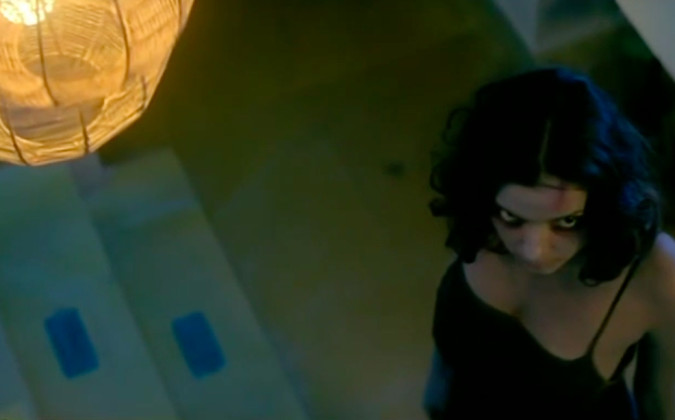 The spirit of Asha’s insane aunty haunts her and during a party she sees her aunts spirit and blacks out. When a stretcher carries her out from the house, she slowly gets back to her senses and turns to have a look at the balcony. The ghost of her aunty stands there, a low light on her face, eyes wide open, a cunning smile and a sharp cut on her face.

Professor Pashupati (Rahul Dev) thinks that Aman (Aditya Narayana) is not strong enough to fight the spirit, which has put a curse on his girlfriend. To prove his strength Aman takes up the task to bring out a spirit caught in a book – the spirit of a girl who had died in the library by hanging herself. The book is kept in the same library, which is guarded by an evil spirit and doesn’t allow the spirit of the girl to go out.  Aman goes there, fights off the spirit and brings out the book with the spirit inside of it. This five-minute sequence is one of the best in Indian horror films. Chilling with scary visuals. 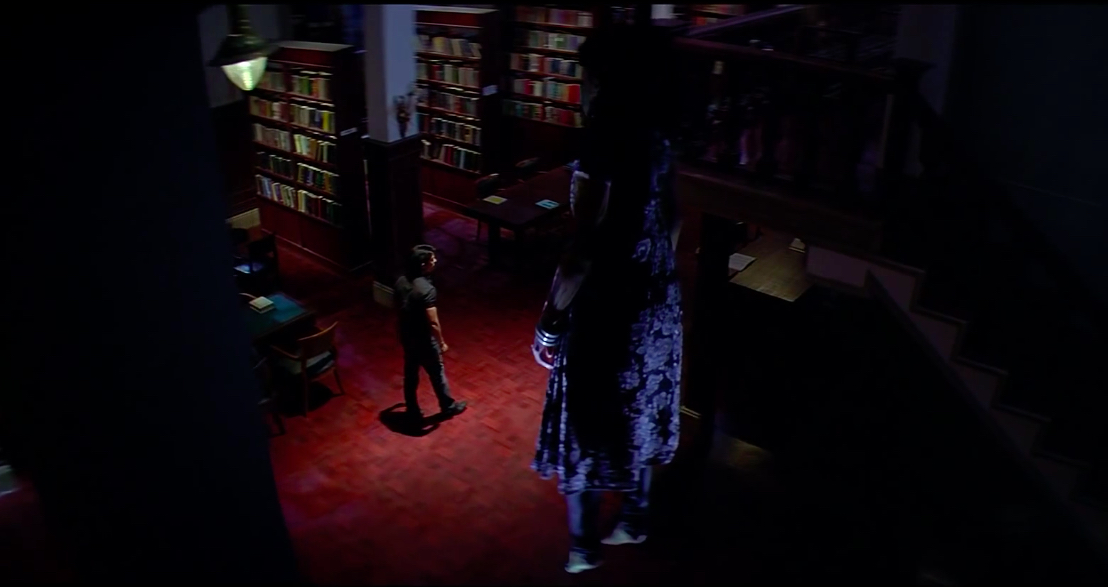 Although this Indian horror was mostly considered as a comedy film, it has some notable moments. The film builds up suspense well from the very beginning. Vidya Balan is obsessed by the character of Manjulika, who was a princess who lived in the same palace earlier. Despite a lot of twists and turns, Shiney Ahuja, the husband denies her obsession. Akshay Kumar advises him to provoke her in order to bring out the secret behind her delusion. In the scene when Shiney Ahuja disallows Vidya for visiting a certain place, she suddenly changes entirely. Her voice is different, she speaks like Manjulika, her eyes widened and she suddenly picks up the bed by using just one hand. This scene is considered one of the most shocking scenes in Indian horror films. 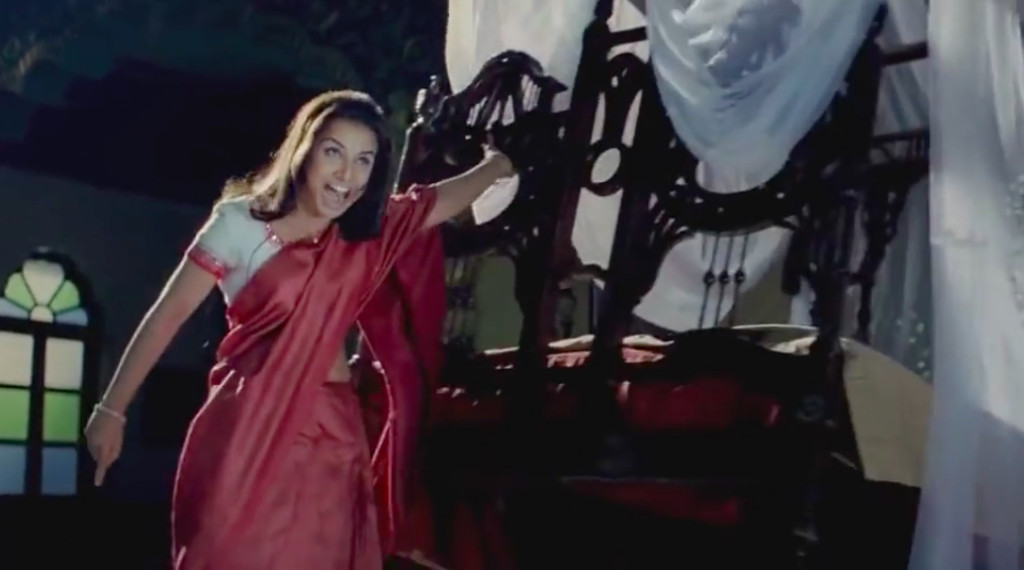 Anjali kills her paralyzed husband for his wealth. His boyfriend Anand helps her in poisoning and burying the dead body below two yards of the land. Their happiness doesn’t last long as Anjali starts hearing strange noises and witnessed paranormal events in her deceased husband’s home. One night, when she is sleeping, the same noises occur again so she goes out with a candle in her hand to have a look. The candles blow out because of the wind so she comes back inside to light it again. Inside there is absolute darkness and in a corner Anjali is trying to light the candles, as soon as the candle alights, we see the corpse of her husband standing just behind her (she cannot see him yet as he is behind her). She starts walking towards the room and her dead husband follows her. This 1972 classic horror is one of the earliest horrors in Indian cinema, which rocked the box office and was loved by all horror fans. 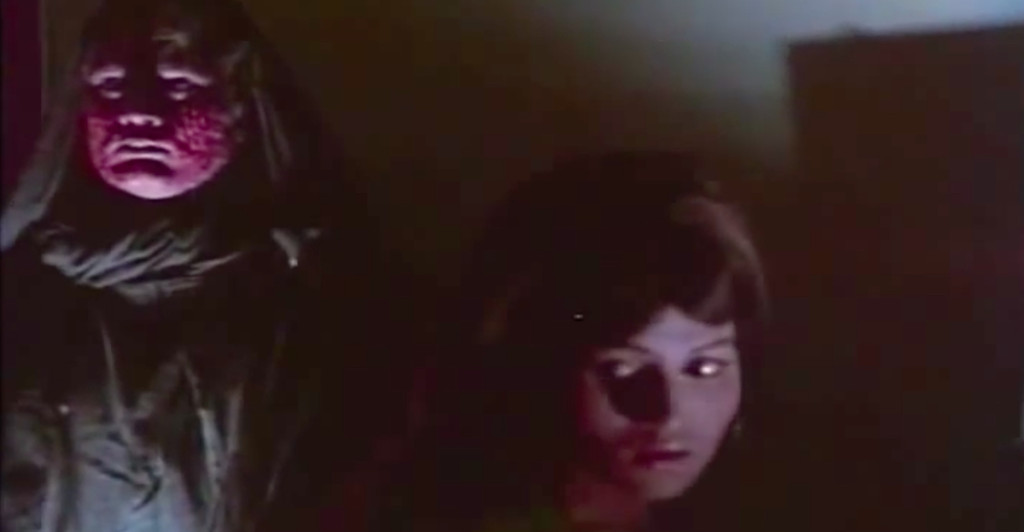 Hypnotized by demon Saamri, the servant of the palace Sanga pulls out the box containing Saamri’s head from the basement. He is spellbound and is given the duty of taking the box with the head to the old temple (Purana Mandir), where the rest of Saamri’s is buried. Once the head meets the body, a devil is reborn. Riding on a horse cart, Sanga’s eyes are all white and he is driving the cart like a crazy person. Mohnish Bahl and Puneet Issar chased him to stop. A terrific scene from Indian horror film Purana Mandir. 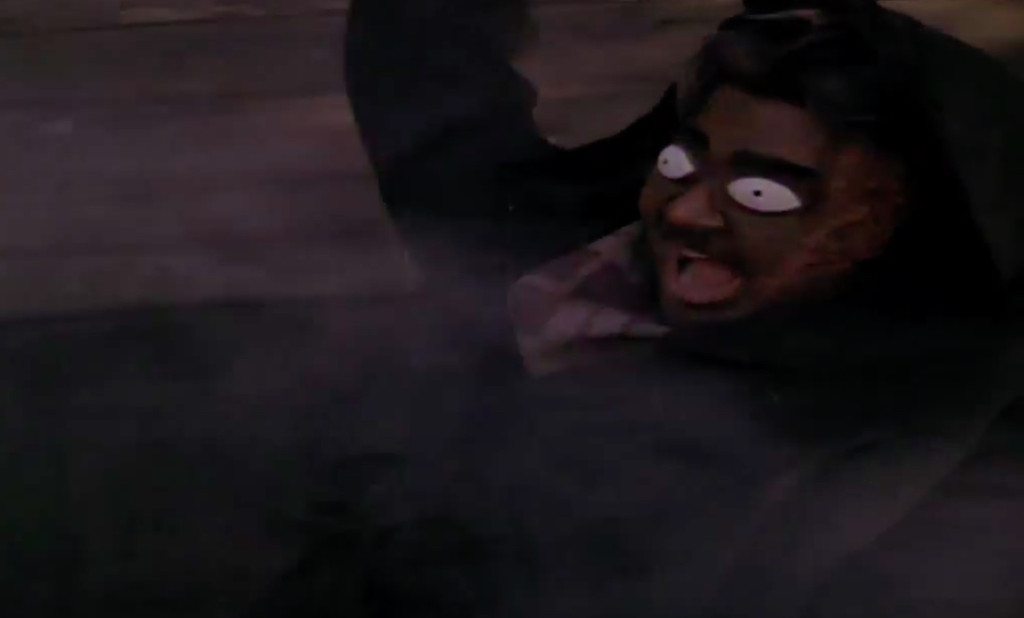 This Indian horror film directed by Ram Gopal Verma is considered a milestone in Indian horror. In this particular scene the protagonist Revathi is watching a film with her friends in a cinema hall. The film running on the screen is a comedy and everyone is laughing, suddenly Revathi realizes that she is alone in the hall. The camera goes back and we see the whole hall empty and no film running on the screen. She gets scared and comes out to the lobby, which is deserted too. She looks out from the window to find the parking lot also empty. She tries to come out from the theatre but all the doors are locked. She is running helplessly all around but not a single living being is there. Finally she sees someone sitting in the manager’s cabin sitting on a chair. She goes inside slowly and the person sitting on the chair has their back to her. Revathi waits, she is shivering and slowly gathers the courage to move the chair only to find that IT IS HERSELF SITTING ON THAT CHAIR. The scene cuts back to hall where all the friends are laughing and she realizes it was just a bad dream. Brilliant use of Steadicam, superb shot taking and marvelous acting by the lead actress.

Sanjana (Bipasha Basu) has no clue why repeated paranormal occurrences are happening in her bungalow. While sleeping she hears the screaming sound of a women. She goes out to check. Everything outside is dark, Sanjana is afraid, shivering. And then in front of a huge mirror, she sees her own reflection. But she is not alone, on the other side of the mirror a figure appears – a women, soaked in blood. She looked angrily at Sanajana and raised her hand pointing the finger in her direction. 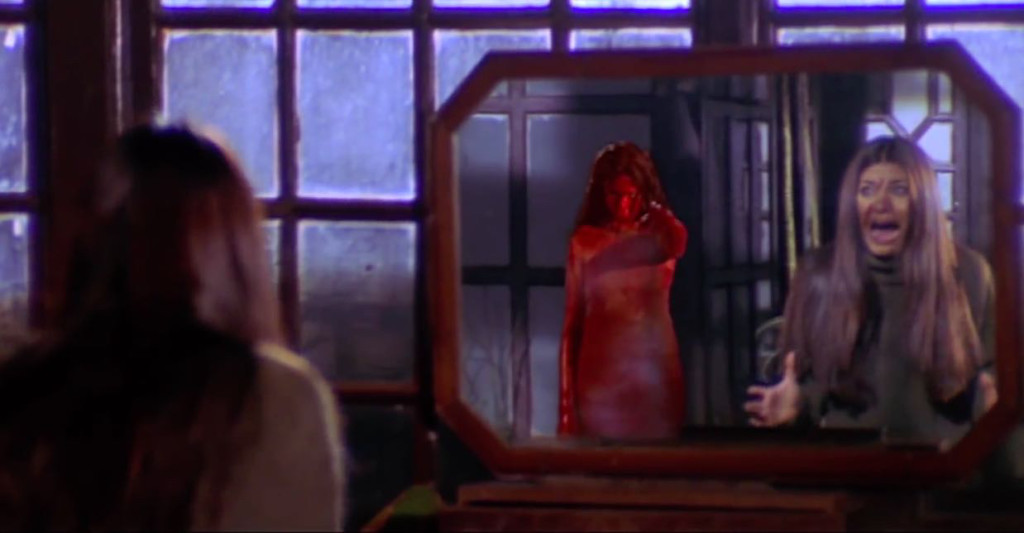 This short horror from Indian horror anthology film Darna Mana Hai had an excellent plot with a twisted ending. A car driver gives a man a lift while passing a graveyard. He gets scared when the man reveals himself as a ghost and when the car driver asks him to leave his car, he was told that it was a prank and he was made a BAKRA (like in Mtv Bakra). The car driver removes his shades showing his eyes, which are hollow, depicting that the car driver in fact was a real ghost. The prankster died at the very spot by the shock. Vivek Oberoi and Nana Patekar gave terrific performances in this short horror directed by Prawal Raman. 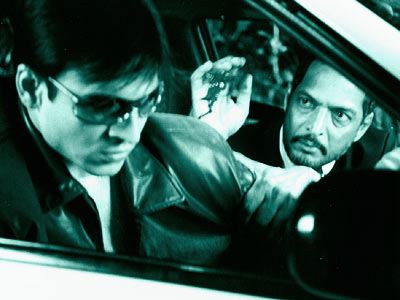 After getting possessed by the ghost of the mansion she was living in, Lisa is stuck to her bed. Her husband is worried and so approaches the father of the nearby church who is also experiencing unusual things in the church. While the father wants an exorcism, a doctor believes she must be hospitalized. In the hospital, Lisa becomes violent. She become so powerful that no one can control her. When the doctor decided to sedate her, she get back to normal only to stand up in the next shot. She calls the doctor by his nickname (she has only come to the city a few days ago and doesn’t have any connection with the doctor). Going ahead she tells doctor about his mother and his illicit relationships. An extreme shock for the doctor and so the audiences. 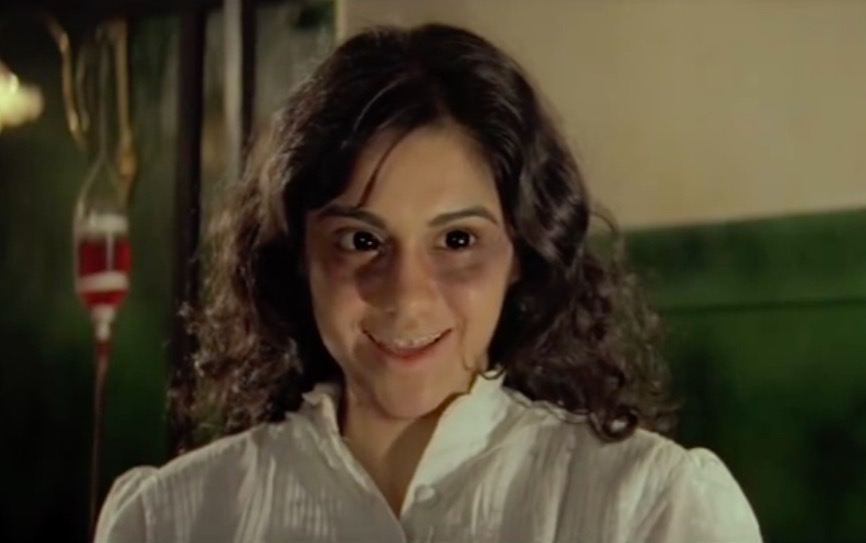 After shifting into a new flat with her husband, Swati (Urmila) continuously finds the place quite unnerving. We see so many sequences where she is witnessing strange noises, some eerie presence and finding an old doll in a room. But after 12 minutes in the film, Swati wakes up in the night. She goes downstairs in her duplex to take water from the kitchen. While she is coming back, the camera is on the stairs. We see Swati coming towards the camera filling the frame, and as she passes by to the right of the camera we suddenly see a women at the bottom of the stairs looking at us, dark eyes clad in a black dress – that is the ghost of Manjeet which will haunt Swati for the rest of the film. One of the best jump scares in Indian horror films. 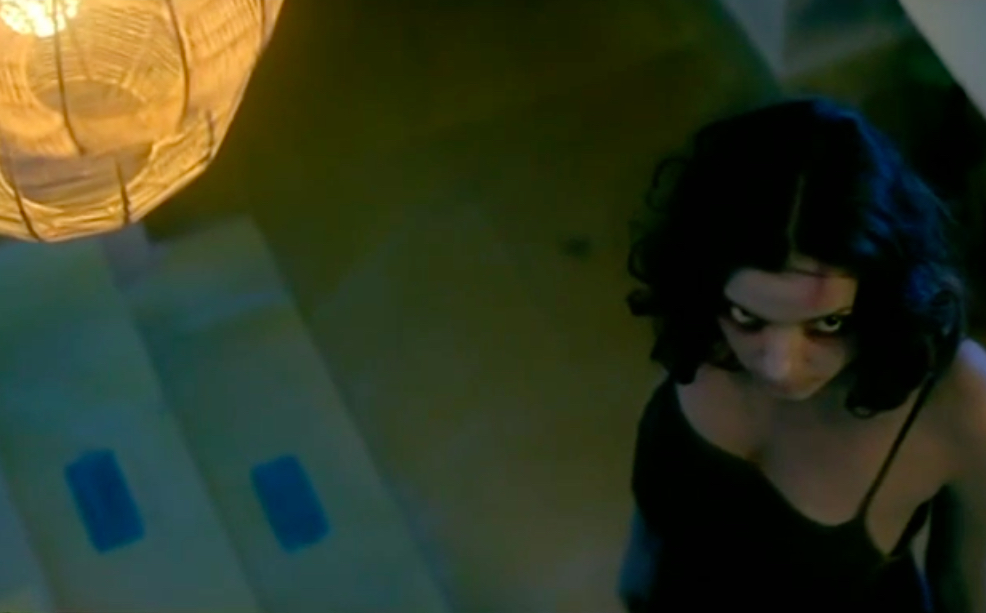